Loading...
> #siren-sound , #fire-engine , #sound , #science , #interesting-facts , #general-knowledge > When a fire engine goes by, why does the siren’s sound change?

When a fire engine goes by, why does the siren’s sound change?

Have you ever stood on a city sidewalk and heard the distant wail of an approaching fire engine? As the fire truck comes into view, the sound of its siren becomes louder and more frantic, the wail higher and higher pitched. Then, as it passes, the opposite effect occurs: The sound of the siren drops in pitch, getting lower and lower as the vehicle vanishes into distant traffic. But the fire truck’s driver hears no such change; to him, the siren that he flipped on 20 blocks ago has sounded at a steady pitch. 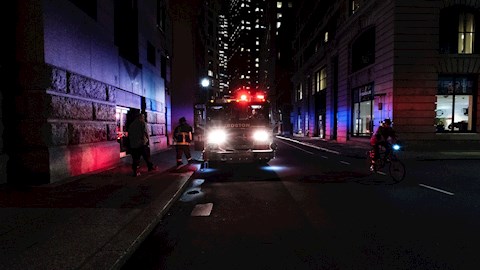 Sort By
Anonymous
Mar 30
Just as with the shifting whistle of a passing train, or the roar of a jet plane taking off into the sky, what you hear depends on your vantage point. We can thank the Doppler shift for the built-in sound effects of noisy objects on the move. An Austrian physicist and mathematician named Christian Doppler was one of the first to do experiments on the strange effect. In 1845, Doppler coaxed a group of trumpet players to board an open train car, to demonstrate the effect in action. As the musicians began to play, the train engine moved the car back and forth along the track. Meanwhile, a second group of musicians stood still by the track, carefully noting the trumpets’ constantly changing pitch. How does it work? As, say, a whistling train rushes toward a railroad crossing, the sound waves coming from its whistle are squashed together. This creates waves of higher frequency, so we hear a higher-pitched sound. But as the train passes us, the sound waves spread out behind it, rather like the smoke coming from a coal-fired engine’s smokestack. Result: We now hear a lower-frequency, deeper sound. But the whistle, the train, and the people aboard it are all moving together. Since the passengers and crew hear the sound from a constant distance, the pitch of the whistle remains the same for them. The Doppler effect works on other kinds of waves, too, including electromagnetic radiation—everything from radio waves to X-rays to visible light. Take visible light waves. If our fire engine were emitting a bright yellow light from its front and back, the frequency of the light waves would change as the engine approached and then sped into the distance. At ordinary, everyday speeds, we wouldn’t notice a color change. But if our imaginary fire truck could speed up to an enormous velocity—a large fraction of the speed of light (186,000 miles per second or 299,792,458 m/s exactly)—we would notice a startling difference. The driver would see a steady yellow light beaming out on the road in front of him. But to sidewalk onlookers, the light waves would become compressed as the fire engine came nearer. And they would see the light change from yellow to higher-frequency blue. As the engine passed, observers would watch the light on the back shift from blue back to yellow, as the light waves spread out again. Finally, they would glimpse the light from the fire engine as a receding speck of low-frequency red, disappearing on the horizon. By the 1920s, astronomers like Edwin Hubble had realized that light from distant galaxies is similarly shifted toward the red end of the spectrum, indicating that they, too, are speeding away from us. By measuring the shift of the light from these faraway stars, scientists verified that the galaxies are rushing away from each other, the light of their stars spreading out like the sound waves of receding trains. Scientists had used the familiar Doppler effect to discover something amazing: The universe itself is expanding, the galaxies moving apart like polka dots on the surface of an inflating balloon. Fast Fact: Whether it’s sound waves or light waves, frequency is the number of wave crests (peaks) that pass any given point each second. The higher the frequency, the higher the pitch of the sound—or the bluer the light.
0
Te
Click here to log in
Ask an expert Become an expert | View All
Become an expert | View All