Loading...
> #science , #interesting-facts , #mirage , #general-knowledge > Why do we see an imaginary patch of water (mirage) on the road ahead?

Why do we see an imaginary patch of water (mirage) on the road ahead?

Ah, summertime. Season of cookouts, fireworks, road trips, and mirages . . . like that cool, shimmering pool of water on the highway ahead on a scorching-hot, drought-dry day. Mirages can be even more spectacular in Earth’s coldest regions. Take a trip to the Arctic, and if conditions are just right, you may see an upside-down iceberg, seemingly hanging in the air above the sea. 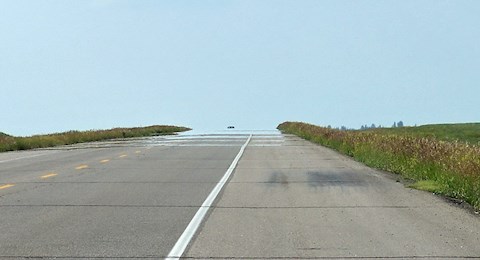 Sort By
Anonymous
Mar 30, 2020
A mirage is created by light’s bendy encounters with air molecules. Take the mundane mini-mirage of a patch of water on a (dry) blacktop road. Asphalt is very good at soaking up heat from the Sun, and heat rising from the hot road warms the air above it. As sunlight streams down through the sky, it passes from a layer of cooler, thicker air into the thinner, hotter air just above the road. Thinner air means fewer gas molecules for light to encounter. So as the leading edge of a light wave enters the hot air, its way is clearer, and it speeds up. However, the rest of the light wave, still traveling through thicker air, lags a bit. This makes a kind of kink in the wave. The bent (refracted) light wave is now traveling along the road, its bottom in hot air and its top in cooler. The resulting drag causes the wave to bend again—sending the beam of light up, toward your eyes. And you see water. How come? Part of the light that reaches your eyes is carrying an image of the sky. Since hot air is full of movement, the image shimmers. Presto: a patch of “water” on the road ahead. But as you drive nearer, the image seems to move down the road, vanishing and reappearing, always out of reach. Such a mirage is called an inferior image, because the mirage appears below the real pictured object (in this case, the sky). But there are also superior mirages, casting images up from the ground. This can often happen on a lake or ocean, where a cool, thick layer of air often hangs under a heated layer. In this case, light rays bouncing off water or expanses of ice may bend up into the sky and then back down to us. In 1643, a priest named Angelucci described an incredible vision he had seen while looking across the Straits of Messina between Sicily and Italy. At first, he said, the sea stretched out calmly to the horizon. But as he watched, a dark line of mountains suddenly rose up out of the water. In front of the mountains, thousands of dirty white columns sprang up from nowhere. Soon, the columns shrank, and finally curved over into Roman arches. Then, in a kind of grand finale, giant castles, studded with windows and towers, grew on top of the arches. What the priest saw was a kind of towering, complicated mirage called a fata morgana . Fata means “fairy” in Italian. In legend, Morgan le Fay was King Arthur’s sister. Her special talent: creating castles that hung suspended in the air. The mountains, columns, and castles that appeared before Father Angelucci were really shimmering slices of the sea, cast up in a hodgepodge of angles. Such fantastic images can be created even out of a flat, calm sea, as light bending this way and that throws pieces of the ocean into the sky. Besides ghostly mountain ranges, real mountains and city skyscrapers can appear out of place and upside down. And sunlight striking a boat hidden below the horizon can bend as it travels through the atmosphere, making the boat appear as if it’s in the water ahead—or even sailing through the clouds. Fast Fact: Since mirages are as (optically) real as rainbows and rings around the Moon, we can even photograph these tricks of light.
0
Te
Click here to log in
Ask an expert
Become an expert