Why do wheels appear to spin backward?

We’ve all seen it in movies or old TV westerns—as the stagecoach (or train) picks up speed, its fast-moving wheels appear to switch direction, slowly turning backward. We also occasionally see the phenomenon in real life, with spinning car tires and whirling ceiling fans. Scientists call it the Wagon-Wheel Effect. What causes the “backward” effect? 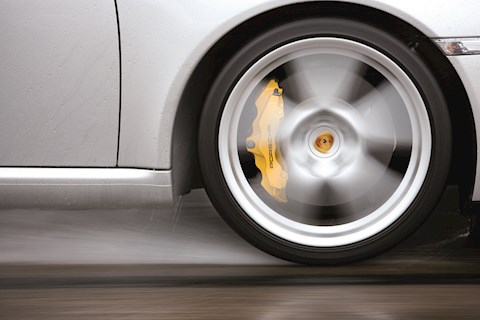 Sort By
Anonymous
Mar 30, 2020
The answer, it turns out, depends on whether the effect you see is on film, in a fluorescent-lit room, on the freeway at night, or in daylight. There’s no argument about what’s happening when we’re watching, say, a train engine on film. A movie camera that uses film takes many snapshots per second of the scene unfolding in front of it, adding up to thousands of individual images on a long strip of film. Because the pictures are taken in quick succession, there’s little motion lost between each one. When you view the finished movie, snapshots of the action flash by on the screen. As they do, your brain keeps the previous image in mind as you see the next one. The action appears continuous—just as it was in real life. But when a filmed wheel rotates at just the right speed, the backward effect occurs. How? If one snapshot is taken with a spoke in the 6:00 position, the same spoke may have sped around to 5:59 when the next snapshot is taken. And the next shot may be of the spoke frozen at the 5:58 position. When your eyes and brain put the motion together, the wheel seems to slowly turn backward. The illusion is a kind of camera strobing—as in a dance club, when flashing strobe lights freeze dancers in a series of positions. The same thing can happen when we use a digital camera, which records a series of images, at 25 to 50 frames a second. A similar illusion can even occur in real life, in a room lit by fluorescent lights at night. According to neuroscientist David Eagleman, older fluorescent lights cycle on and off 60 times a second, and the strobe-light effect can make a ceiling fan appear to turn backward. The flickering sodium-vapor lights on a freeway at night can have the same effect, he says, on our perception of spinning car wheels. But what about the backward effect in broad daylight? Some scientists think that the brain/eye system may process visual information in individual units—like a movie camera’s individual snapshots of motion. However, Eagleman believes that this “snap-shotting” view of the brain is wrong. He has done experiments showing that the daylight backward effect is real, but can be explained by the way the brain interprets motion from the right and left. When the brain sees a pattern moving from the right to the left, Eagleman says, more of its leftward than rightward motion detectors are activated. But in a kind of brain neuron rivalry, the rightward detectors win out now and then, and a moving pattern appears to reverse itself. To see the real-world effect for yourself, Eagleman suggests staring at your home ceiling fan. During the daytime, with all artificial lighting off, turn the fan on at a slow speed. Then make yourself comfy—say, on the couch—because seeing the illusion can take eight minutes or more. With patience, he says, you should eventually see the fan running backward for a few seconds.
0
Te
Click here to log in
Ask an expert
Become an expert
Ask
Vlogger, IT Freelancing Coach

Maps or Waze or what else do you use as a gps navigation app for a long drive? Which gps application would you recommend?