Why does the sky turn colors at sunset?

On a sunny day, the sky is blue, the clouds white, and the Sun a normal, if a bit boring, yellowish-white. But at sunset, white clouds and blue sky turn pink and orange and purple, and the Sun glows orange red. 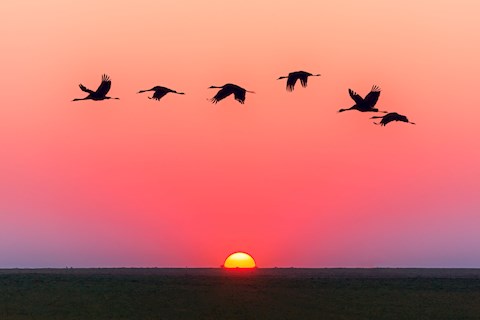 Sort By
Anonymous
Mar 26
This stunning change is brought to you mainly by whizzing gas molecules, along with other tiny particles drifting in the sky. Here’s how it works. The light that is produced inside the Sun is white light. But white light contains within it many colors—all the colors of the rainbow. A prism splits white light into its true colors like a comb separating hair into its strands. White light enters the prism; bands of red, orange, yellow, green, blue, indigo, and violet light stream out the other side. As sunlight encounters the atmosphere’s gas molecules (like nitrogen and oxygen), it is broken up into its colors, then scattered every which way. Longer-wavelength light, like red, is scattered less. Shorter-wavelength light—blue and violet—is scattered more, flooding the sky. At sunset and sunrise, with the Sun near the horizon, its rays traveling nearly parallel to the ground, sunlight must travel a longer path through a thicker blanket of air before it reaches our eyes. Even more of the blue end of the spectrum is scattered out of the light beam and into the sky. And we see the Sun’s face redden. Clouds reflect the reddened light too, creating a tapestry of oranges, reds, and pinks. Just after the Sun sets, purple patches may develop in the sky. Some scientists think the purple is a color overlap: intense red light from near the horizon mixing with blue light from higher in the sky. As the Sun sets, light streaming through our west-facing windows turns a deep gold, and bright oranges and reds streak the sky. But when the Sun rises, the light that first floods through our east-facing windows may be a beautiful blue as the sky begins to light, often followed by a rosy pink as the Sun makes its appearance. How come? Dust and pollutants are near their peak at sunset, after a day’s activity by human beings—digging in the ground, constructing buildings, operating machinery, driving cars. The tiniest of these particles, comparable in size to gas molecules, also scatter blues out of sunbeams—making the Sun’s face appear extra-red. Larger particles reflect and scatter warmer colors, adding red shades to the sky. The air at sunset is also usually much warmer than the air at sunrise, since the Earth cools overnight, radiating heat into space. And hotter air is more turbulent than cooler air. At dawn, scientists say, the lower atmosphere is calmer, cooler, and cleaner. Daytime’s dust has settled. Air molecules still scatter blues out of the streaming sunlight. But since there are fewer tiny particles to add to the scattering, the rising sun may appear less red than the setting sun. And clouds in the dawn sky may wear more delicate tints of pink, yellow, and peach. Fast Fact: When volcanoes erupt, dust and ash particles and droplets of sulfuric acid are lofted high into the sky. After the sun sets, these “clouds” 12 to 18 miles high can scatter yellow light, creating crimson twilight afterglows.
0
Te
Click here to log in
Ask an expert Become an expert | View All
Become an expert | View All