Why is the sky blue?

Why is the sky blue? The sunlight that lights up the daytime sky is white. So why isn’t the sky a brilliant white? 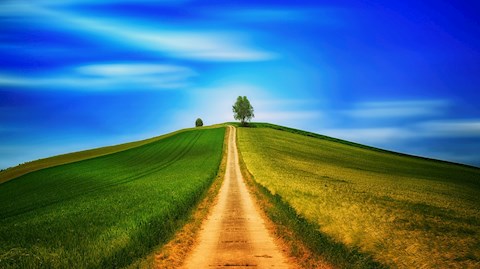 Sort By
Anonymous
Mar 26, 2020
In order for the sky to look blue, something must be happening to the light as it passes through Earth’s atmosphere. When white light streams in from the Sun, it zips from the near vacuum of space into the gassy atmosphere blanketing our planet. When white light streams in from the Sun, it zips from the near vacuum of space into the gassy atmosphere blanketing our planet. While Earth’s air contains traces of many gases, from carbon dioxide to argon, nitrogen (at 78 percent) and oxygen (21 percent) make up most of the atmosphere. And when photons of sunlight encounter the gas molecules of Earth’s air, they are changed by the encounter. Where does the blue come from? Actually, the blue was in sunlight all along. White light is made of a concealed rainbow of colors, revealed when a beam of sunlight passes through a prism. Then we see the familiar rainbow spectrum: red, orange, yellow, green, blue, indigo, violet. Each color is a different energy and wavelength. The air’s gases tease these colors out of white light. Some sunlight simply zips through the empty spaces between gas molecules, reaching the ground intact. But light that has a run-in with gas molecules is absorbed, split into its true colors, and then scattered every which way. How does it work? A gas molecule’s member atoms get excited by the photons (particles) of light, and re-emit photons in distinct wavelengths—from red to yellow to violet. The light then heads on toward the ground or is sent out sideways into the sky. Depending on the angle, some light even zooms back into space. And here’s how the sky turns blue: The shorter-wavelength blue-to-violet end of the sunlight spectrum is scattered much more than the reds and yellows. So we see blue light from every direction in the sky, overpowering fainter red, yellow, and orange. Interestingly, violet light is scattered by gas molecules even more strongly than blue. So why don’t we see a sky awash in purples? According to physicist Jearl Walker of Cleveland State University, there are two explanations: The violet part of sunlight is dimmer than the blue, and human eyes are less sensitive to shorter-wavelength violet. It may be a different story for others living on Earth. Since the eyes of animals are sensitive to different wavelengths of light, it’s likely that many animals perceive Earth’s sky in different hues. Honeybees, for example, can see all the way into the spectrum’s invisible-to-us ultraviolet. To a bee, the sky may be tinted purple. For us humans, during the daytime, the blue stands out, intensified by the black backdrop of space behind the sunlit atmosphere. But where does the blue go at night? While the Sun is below the horizon, Earth’s sky is still just as full of gas, scattering the light that remains. According to Walker, the night sky is indeed still blue. But the blue is simply too dim for our eyes and brain to perceive. However, a camera set for a long exposure—collecting light for several minutes to several hours—can reveal the deep, true blue of a starry night. Fast Fact: Intense blue light floods at us from all directions in the sky, from zillions of gas molecules. We call it Rayleigh scattering, after Lord Rayleigh ( John William Strutt), the British scientist who explained the phenomenon in 1899.
0
Te
Click here to log in
Ask an expert
Become an expert